Making a splash in the iPhone's wake: Helio

July 6, 2007/Comments Off on Making a splash in the iPhone's wake: Helio

We’ve always had a bit of disdain for Helio’s whole “don’t call it a cell phone” campaign. We understand that they want to stand out from the pack, and yes, they do offer a unique service that exceeds that of most other cell providers. But in the end, it’s still a cell phone — just like the iPhone. In fact, the Helio Ocean has plenty in common with the iPhone, and they’re using that much to their benefit. One of the iPhone’s main selling points was it’s wide-ranging access to YouTube. Well, guess what? Helio offers the same kind of access, at 3G speeds instead of the current EDGE-networked iPhone. Both services are set to provide access to the entire YouTube library this fall. 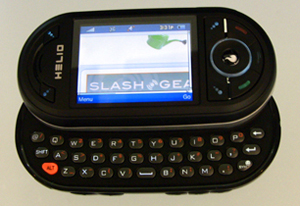 However, the Helio Ocean does offer a few perks not yet in the iPhone’s arsenal. Use MySpace much? Helio has a MySpace Mobile client that allows you to edit your profile on the go. A new feature: it automatically uploads any pictures you take with the phone to your MySpace profile. There are obviously some drawbacks to that, but it’s neat idea in theory. The Ocean has been out for a while, but the recent iPhone crazy has started to make it more visible. Honestly, we like the looks of it. It’s much cheaper ($299) than the iPhone, and provides as good if not better service. We haven’t done much research on the customer service end of their business, but you can expect that in the coming weeks (we’re working on a review). So for everyone out there who doesn’t want to drop $600 on an iPhone, but wants similar features and a prepaid plan, we seriously recommend you check out Helio. [My iTablet]]]>
Posted in Helio, Prepaid Phones