We'll call it a phone: Helio adds another killer device 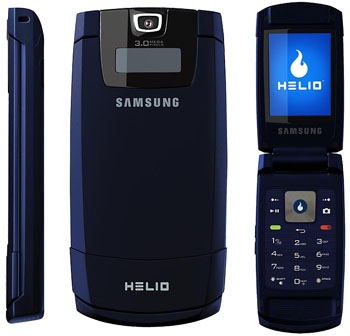 Helio, a service provider soon coming to PrepaidReviews.com, has launched a new multimedia phone: the Samsung Fin. It shares many features with the company’s Ocean model, though it is an ultra-thin flip phone, rather than a PDA. Fans of phones like the RAZR will have a field day with the Fin — it is a mere 11.4 millimeters deep which, for those of you who aren’t metric-friendly, is really freakin’ thin. But Helio has managed to stuff a number of impressive hardware features under the shell, including a GPS, 3 MP camera, and a 3G EV-DO radio. If you’re excited now, wait ’till we get to the applications. Our favorite is the built-in RSS reader. We’re subscribed to about 40 feeds — some for work and some for play — and if we go out we always come home with over 100 items in our reader. We end up not reading the majority of them, but the process does take time. With an RSS reader on our mobile, we could ax those junk posts in smaller batches, thereby taking less time in the long run — or at least making us think we’re saving time. We’re also big fans of HelioUp, a program that uploads photos and videos directly to Flickr and YouTube. Beyond that, it has Myspace integration, unified e-mail access, and the standard text messaging and instant messaging. The GPS is free via Google Maps, though a mere $3 per month can nab you a more reliable service. Nothing against Google or nothin’, but we like trusting our navigation issues to companies focused on just that. For $3 a month, it’s worth it for us. The price: $175, but you get a $50 rebate. Not bad, Helio. Not bad at all. [Fin from Helio] via [IntoMobile]]]>
Posted in Helio, Prepaid Phones