June 5, 2007/Comments Off on 26 excuses for using your friends' prepaid minutes (and not your own)

We face this dilemma just about daily: you need to make a call, but dammit, you don’t want to or can’t afford to use up precious minutes. What to do, what to do? The decision usually comes down to opportunity cost. The more necessary the call, the likelier one will spend his or her hard earned minutes. However, there are certain instances where the call is not necessary, but the desire to call is so high that logic is tossed right out the window. You still don’t want to spend minutes, but making that call begins to be all you can think about. The minutes and hours go by, and you find yourself staring at a blank computer screen, unable to recall what just happened. This is why you have friends. They can be the shoulder you lean on when you’re down, the one to accompany you on a trip you don’t want to take, and certainly someone who will lend you cell phone minutes. However, friendship can only be taken so far. After all, they have limits on their minutes, too, and are likely just as reluctant as you to spend them. And why, if they’re watching those minutes, would they just hand them over to you? In order to get your friends to hand over their cell phones, you have to play certain angles to make them sympathetic to your situation. In other words, you need to manipulate them to get them to do what you want. Think Eric Cartman. Dream Eric Cartman. Be Eric Cartman. In case you’re having a little trouble coming up with excuses, er, reasons why your friends should let you use their cell phones, here’s a list of 26. It is highly recommended that you mix up the excuses and the friends on whom you use them. You wouldn’t want anyone catching on to your devious game, now would you? The Promise Never Kept Our first category has you making various promises that you likely won’t keep. These only work once in a while, since using them frequently will give you a bad rep, and no one will let you use their phones. However, used properly, these are basically a slam dunk. Key note: after hanging up your friend’s phone, conveniently forget the promise. 1. “I’ll let you use mine next time.” Simple, to the point, and with a direct promise of a return on investment. 2. “Let me use your phone and I’ll buy you…” The promise is a bit more specific, so it’s more likely to work. Just make sure it’s nothing that your friend can cash in immediately; you may have to follow through in that case. 3. “I’m out of minutes this month. I’ll let you use mine once I recharge.” The alternative here to conveniently forgetting the promise is to simply not recharge your minutes. 4. “It’ll only be a minute.” Whether or not it’s true, that line can usually seal the deal. Note: won’t work if you keep saying that and end up making 10 minute calls. People tend to pick up on it. Forget Your Phone Why have a phone if you’re not going to use it? Easy: you don’t spend minutes that way. Forgetting your phone requires an excuse, though. Once again, it won’t work all the time, but if you rotate the friends on whom you use it, it can play to your advantage. 5. “I left it in my car.” The oldest trick in the book. Presumably, you’re in someone else’s car, and yours is an unreasonable distance away. 6. “I can’t find my phone. Can I call it with yours?” The key here is to take it into the next room like you’re looking for your phone. But what you’re really doing is making another call. Yes, you can be caught if your friend checks the call log. But it’s tough to get free minutes without incurring some risk. 7. “My phone has been acting up lately.” The beauty of this excuse is that while you can’t use it often, it does buy you a few days of using a friend’s phone. Sweet deal. 8. “My phone doesn’t work on the third Thursday of the month.” Lame? Yes. Implausible? Yes. Worth a shot? Absolutely. Every once in a while, you’ll find a sucker who buys this one. 9. “I don’t have a phone.” Won’t work if 1) you’ve been seen with a phone, 2) you’ve called this person from your phone or 3) this person has any sense whatsoever. Everyone has a phone. Who are you kidding? Only the most foolish of fools. But hey, they exist, so give it a whirl. Lame-o Excuses A good scheme needs a good alibi. Though, in this case, these are certainly more in the realm of of excuses. There are enough here that if you rotate them enough, you might even be able to cancel your own plan. Nah. Just kidding. 10. My battery is dead Plausible and reusable. Your friends might get annoyed after a while (“Dude, charge your freakin’ phone!”), but it’ll be a while before they catch on and quit lending you their phones. 11. “You used my phone to make calls last week.” Of course, that may not be entirely true. However, it’s all about how you sell it. A simple, “I can’t believe you don’t remember using my phone last week,” will usually suffice. Unless, of course, you have a stubborn friend. In that case, most excuses probably won’t work with him or her anyway. 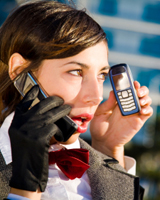 12. “He/she won’t pick up if he/she sees it’s me calling.” It’s a nifty line, though it only works for one person per friend. If your friend asks why, a simple, “oh, I did something to really piss off him/her yesterday” will clear the air. 13. “My phone causes cancer.” Probably not true. But it seems like everything causes cancer nowadays. Just mention that it’s been reported that your specific model phone has been linked to cancer in a recent study. Promise to let your friend see said study when you’re near a computer — and then either forget or admit your ruse (but after you use his or her phone). 14. “The Feds are tracking my phone.” Much more believable if you’re a drug dealer or the obsessive paranoid type. 15. “The call I’m going to make benefits you as much as it does me.” This one works best if you’re calling around about a party, or calling a member of the opposite sex. Not recommended if it’s known that you want to call your bookie — you wouldn’t have to cut your friend in, would you? 16. “I’ve got no bars.” Drawback: if he or she asks to see your phone to prove it, you’re effed. Especially useful if you have an outdated phone, or a different service provider than your friend. 17. “I’m on a tight budget and can’t use any minutes until Tuesday.” This one can be met with a few objections and possibly a few people calling you lame. But hey, if it gets you free minutes, it gets you free minutes. 18. “My mom used all my minutes.” Uber-lame. But hey, if your mom used all your minutes, how are you supposed to make a call? 19. “[Guy/girl] wants me to call from your phone so he/she can have your number in his/her pone.” It might be a bit situation-specific, but if you can exploit it, go for it. Though, you don’t have to call the person in question (presumably someone your buddy has a crush on). Probably more of a special occasion line, but it should buy you a free phone call. 20. “I’m waiting for a call and need to keep my line open.” Do you have call waiting? Of course you do. If someone asks that question (and surely they will), just mention something about your service provider sucking and you never getting call waits. Obviously won’t work if you’ve put that friend on hold for another call. Friendly Manipulation Sometimes, you have to take matters into your own hands. And if that means you dupe your friends a little, so be it, right? It’s not like you’re robbing them or anything; you’re just after a few free cell phone minutes. 21. Slip a roofie in his or her drink Okay, so it might be illegal. But if you’re really desperate to make a phone call, well…you know what? Forget we mentioned it. 22. “Come on, man, let me use your phone. I wouldn’t want anything to happen.” It’s a very subtle threat, and may not even be construed as one. But it asserts your true need to use this person’s phone. If it works, great; if not, you can always call Louie to break a few kneecaps. 23. “Dude, don’t be lame.” No one wants to be lame, so why not shoot that insult your friend’s way. A little peer pressure never hurt anyone…except when it comes to crimes and drugs. But this doesn’t fall under either, so you’re all good. 24. Always “forget” your phone when your friend is driving. This could fall under the first category, but it really is a way of friendly manipulation. It’s not like he or she is going to turn around just to get your phone. And if he or she does, well, it’s a pretty strong indication that there’s no chance you’re using his or her minutes. Bluntness Sometimes, the situation doesn’t call for an elaborate excuse. Maybe your best bet is just to be straightforward with your friend. After all, it reflects honesty…which means that the chances are much better of your excuses working later. 25. Just use it If they ever ask: deny, deny, deny. 26. “Can I use your phone?” You’d be surprised how often this one works. And, if you’re met with an objection, you can just fall back on one of the other 25 ways to get your friends to let you use their cell phone minutes.]]>