The ins and outs of prepaid service — MVNO, GSM, CDMA

However, understanding the meaning behind these terms will allow you to make an even more informed purchase. Company A may have a calling plan that fits your needs and wallet, but what if they offer phones using antiquated technology? Or what if you plan to spend a month on business (or pleasure) in Europe — is Company A compatible overseas? Plus, it’s always nifty to walk into a cell phone dealer and ask the salesperson a question that might stump him or her. You know, make ’em work for the sale. A mobile virtual network operator may seem like a normal cell phone provider. In fact, you’ve surely seen advertisements for such MVNOs as Virgin Mobile, TracFone Wireless, Amp’d Mobile, and Boost Mobile, to name a few. A couple of questions that come to mind: does a consumer benefit from using a company like this, and what’s the difference between an MVNO and a normal cell phone provider? The largest benefit of using an MVNO is that they tend to cater to smaller market segments. While the Sprints and Verizons of the world have to market their products to a more general audience, companies like Boost can home in on a younger crowd that likes more bells and whistles — like the walkie talkie feature, or more affordable text messaging plans. Prepaid plans also tend to be better with MVNOs. Since they tend to market to younger crowds, they realize that many young people simply cannot obtain a credit card. While, say, Verizon may offer prepaid service, it likely isn’t to be of the quality of, say, Boost, because Verizon doesn’t need the prepaid business; they already make plenty in the general market, and they don’t want to compete with their own contract services. And since prepaid comes with a higher degree of risk, they can leave it to the more experimental MVNOs. But if the big providers don’t want to compete with their own services, then why would they allow MVNOs to compete with them? As stated before, MVNOs tend to market to niche audiences, which presumably wouldn’t overlap much with the more general marketing strategy of the big companies. The main draw, though, is that the major providers wouldn’t use all of their available bandwidth with just their normal subscribers. By selling the minutes to secondary providers, even at a wholesale cost, the big companies can maximize their earnings per bandwidth. The difference between cell phone providers and MVNOs is that MVNOs operate not with their own licensed frequency spectrum — which means that they don’t own cell towers or a cell frequency. Instead, they have contracts with the larger companies that do have a licensed frequency spectrum — Sprint, Verizon, AT&T — in order to provide a cheaper and usually more niche service to consumers. Virgin Mobile was the world’s first MVNO, utilizing T-Mobile’s signal in the UK and Sprint’s in the US (though they do have deals with other carriers in other countries). The aforementioned Boost Mobile contracts with Sprint. While explaining MVNO seems rather painless, GSM and CDMA are a bit more technical. However, understanding what each means and which companies use which technology will enable you to be fully aware of the choice in cell phone provider you are about to make. An important preface to GSM and CDMA is that they both must divide up a single channel for use by multiple users. The radio frequency spectrum is finite and limited, so this presents quite the challenge. The Global System for Mobile Communications (GSM) is a mobile communication technology that is employed by many cell phone providers, most notably AT&T and T-Mobile in the US. About 2 billion people use GSM technology, which covers about 70 percent of the world. It was started in Europe in the early 1980s as cell phone technology began to take off to address the issue of universality across the continent. If you plan to travel overseas for any period of time, choosing a company on the GSM network is essential. GSM is based on Time Division Multiple Access (TDMA) technology, which takes the channel and divides it into time sequences. When multiple devices are using the channel (which is always happening), the users take turns sending and receiving signals. This means that technically only one person at a time is using the channel. 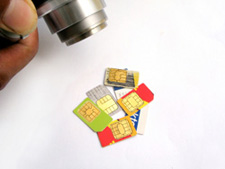 TDMA, however, was the technology used in second generation mobile devices –which you very well still may have, or may still purchase, depending on your cellular needs. As the industry evolved and high-speed data capabilities appeared on more phones, newer technologies emerged. For example, Enhanced Data rates for Global Evolution (EDGE) is a high-speed data technology that has bridge the 2.5 and 3 generations. Next on the evolutionary scale is WCDMA, based on CDMA technology, which we’ll discuss next. However, technology hit a ceiling there. The latest development is High Speed Downlink Packet Acess (HSDPA), which offers download rates of up to 7.2 megabytes per second, and EVDO (Evolution Data Only). And to think: these are the floor technologies in this area. It’s only going to evolve from here, just as TDMA technology did. Code Division Multiple Access (CDMA), also known as IS-95, is considered a more efficient but less universal technology. As mentioned, HSDPA technology is based on WCDMA, which looks to be the future of wireless communications. The two largest CDMA carriers in the US are Verizon and Sprint Nextel. If you’re planning to use your phone exclusively in the US, CDMA looks to be a much more efficient and a higher quality technology than GSM. It is noted for a much clearer call quality, and more secure, too; the military uses CDMA technology for its confidential communications. In addition, it is the technology upon which newer technologies are being built. With TDMA, you’re getting outdated technology. Just like GSM, CDMA solves the problem of splitting up a channel among multiple users, but in a different manner. Instead of taking the channel and slicing it, CDMA signals are transmitted simultaneously over the channel. Each signal is coded, so they don’t get jumbled while traveling. Efficiency is the big selling point of CDMA. It requires fewer cell sites (meaning those towers you see along the highway), and it provides a much greater call capacity — up to five times greater than GSM. The most popular analogy to contrast GSM and CDMA is to a large party or gathering. In the GSM system, conversations wouldn’t be jumbled because only one person would talk at a time. Once that person’s time is up, another’s begins. At a CDMA party, everyone would be talking at the same time, but each conversation would be in a different language. You may be speaking to your conversation partner in Spanish, while the couple next to you is speaking in Swahili. While CDMA has great advantages, it has one enormous drawback: Qualcomm owns the patents on most CDMA technologies, so companies much purchase a license from them in order to use those technologies in their phones. Other drawbacks of CDMA phones are that they generally cannot roam internationally, and that they cover a smaller market compared to the more universal GSM, so new features usually don’t appear as quickly on CDMA phones. That’s a lot of information to process. Put it into English for me, doc. While it’s nice to be privy to the latest in cell phone technology information, you probably are more interested in knowing what it means in relation to your communications experience. Let’s explore the different areas of cell phone usage and determine which would work best for your specific needs. The universal: unless your needs include data transfers, its better to stick with an MVNO when you’re using prepaid services. The packages offered are more consumer-friendly, because MVNOs realize their place in the market. Companies like AT&T and Verizon don’t offer the best prepaid deals because they don’t want to be competing with their contract services. But MVNOs understand that prepaid is only going to give them more customers, therefore increase sales. However, if its the Internet you’re after, MVNOs are slowly picking up the pace. Earthlink is now offering a prepaid Blackberry service. You can still get other prepaid data services, but it usually has to come from one of the big companies. AT&T has led a decent charge in this area. If you do want data, the choice is now between EVDO and HSDPA. The former is used by the CDMA companies — Sprint and Verizon — while the latter is used by the GSM companies — AT&T and T-Mobile. While HSDPA offers a transfer rate of 7.2 mbps, it rarely reaches that potential. EVDO provides about half that rate, 3.6 mbps, but with a much greater consistency. So while HSDPA has a brighter long term potential, EVDO provides the stability you probably need now. Choosing among basic phone services also depends on your specific needs. If you do a lot of business traveling, notably across seas, GSM makes the most sense. However, if your calls remain in the US, CDMA provides a more efficient and better quality connection than its GSM counterpart. For easy consideration, these MVNOs are related to Verizon or Sprint Nextel, thereby providing CDMA technology: Boost Mobile, Disney Mobile, Helio, Qwest, Bratz Mobile, Call Plus, NET10, and TuYo Mobile. So there are of choices out there when choosing a prepaid services. More importantly, those choices are tailor-made for your specific needs. But a consumer cannot exploit these choices without knowing the difference between a GSM network and CDMA, or what an MVNO is. Armed with this knowledge, you will be able to make an thoroughly informed decision when choosing your next prepaid service.]]>